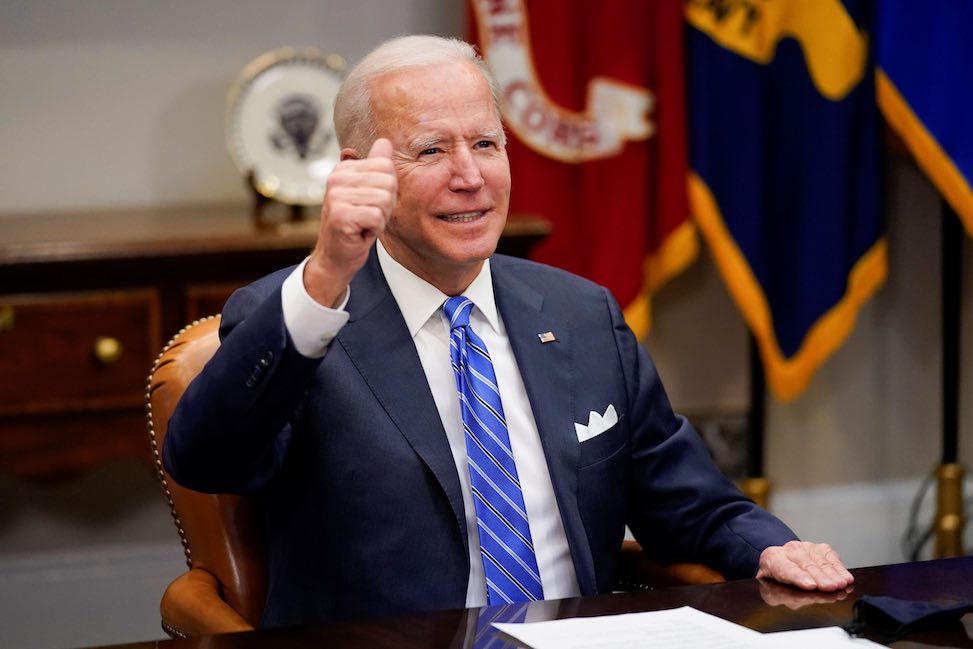 The 1.9 trillion dollar Pandemic Relief bill that just passed in the Senate is a huge big deal. “The plan is one of the largest federal responses to a downturn Congress has enacted and economists estimate it will boost growth this year to the highest level in decades and reduce the number of Americans living in poverty by a third. …” (Washington Post)

While Americans cheer on the Democrats who are getting them the help they need and want: vaccines, reopened schools, extended unemployment benefits, protection against eviction, and more…Kevin McCarthy, House minority leader, was reading Green Eggs and Ham by Dr. Seuss in a Twitter video.

The Republican Party is betting that culture wars and white supremacy will win them back the House in 2022. But will it? Much of its thinking seems counterintuitive if the party hopes to enjoy political success. By 2045 this country will no longer be majority white. It will have become a multicultural, multiracial country. Every year gets us closer to that inevitability. The Republicans may think they are playing the short game to win, but the Dems are playing both the short and the long game a lot better.

What is success for a political party? Having power, of course. Power in the House, Senate and Executive branch and power in state legislatures. With power comes the opportunity to pass legislation that aligns with the values of people who vote for you. With the American electorate rapidly shifting to become more multicultural and multiracial, you would think that the Republican Party would be working as hard as possible to appeal to a rising tide of Americans of all racial backgrounds. Instead, it has become the dwindling party of white supremacy with a contracting base, shedding moderates and reducing itself down to a hard core group of outliers: Proud Boys, Three Percenters, QAnon followers, Oath Keepers, wayward Evangelicals, and Libertarian elites. It is working hard in red states to make it harder to vote, say no to regulations and push culture war hot buttons. Is that really the way to win with Americans? Why is this happening anyhow?

How the Koch Brothers Captured the GOP

To understand what happened to the GOP it helps to understand the Koch family and their campaign to indoctrinate Americans with Libertarian ideology. Fred Koch was a chemical engineer in Texas in the 1900s. He figured out how to extract gasoline from crude oil and was catapulted to great wealth. Fred believed that big government is a disease. It got in the way of free wheeling corporate action. There should be no taxes, no zoning, no rules, nothing to hinder the free market. Free markets were the key to human freedom. Liberty was all important. Fred raised his sons Charles, David and William to believe in the Libertarian way of thinking: the mission was to tear out government at the root.

When Fred died, Charles Koch along with David, became massively wealthy. In the mid-70s they launched an influence campaign spanning decades to move our country ideologically to the right and defeat liberal thinking.  To make right-wing conservatism mainstream, the Koch brothers, aided by other ultra conservative, super wealthy donors, used their money to establish right wing think tanks like the Heritage Foundation, Cato Institute, and American Enterprise Institute and funded people who would push right wing ideology. They influenced universities, law schools and courts including the Supreme Court, misinformed the public about climate change, pushed for Citizen’s United to permit dark money in politics and much more. By funding attack ads, mass mailings, gerrymandering and right wing candidates, and Fox News as well as other conservative platforms and hosts, they have left their mark on the country and have effectively turned the GOP into a mouthpiece, moving the Republican Party farther and farther to the right. The Libertarian ideology has now become the bedrock thinking of the Republican Party. Trump as president did a lot to tear out government at the root.

Use the Me or Us Lens to Understand Political Motivation

It helps to use this lens to understand politics. Take Texas as an example. The Lone Star State is the quintessential Republican state. Governor Abbott embraces the Kochian ideals that government is unnecessary and the “nanny” state is a socialist abomination. That thinking is the reason Texas failed to protect its residents from a hard freeze causing the power grid to collapse. The same power failure happened in 2011 but Texas did not step in to regulate any changes to the inadequate system. Texas governance is next to nonexistent. It is an example of what happens when Libertarian ideas get translated into policy– or lack of policy– in real life. Texas Republicans believe they must have the freedom to live mask free and risk getting sick and maybe even dying on their own terms. Masks are for sissies.  Own the libs!

And yet how much of an imposition is it to wear a simple face mask? How much of a restraint on your liberty is it to don a face mask to save the lives of yourself or others? Compare the sacrifice of wearing a face mask to the sacrifices Americans made when they fought in World War II. Nonetheless, Governor Abbott is removing mask mandates and opening up businesses in Texas as of Wednesday, March 10th. Why? To satisfy the base that values their “freedom” over government imposed rules. That makes sense if you are looking at things through the “me me me” lens.

Trump has added to Libertarian right wing ideology by pushing culture wars as a way to energize the base. Republicans have been encouraged to believe owning the libs matters more than following government directives that could save lives. Trump also encourages conspiracy thinking and denialism if an idea doesn’t align with the goal of “Me first”ism. Masks are unnecessary if there is no pandemic going on. Just pretend it away. Helping others is irrelevant if it is all about ME ME ME.

The pandemic relief bill enjoys a 71% to 75% approval rating from the American people, but no Senate Republicans voted for it. NOT ONE. Wisconsin Senator Ron Johnson delayed the passage of the bill by forcing the reading of the entire 628 page bill to show he was working really hard to defeat it. This was a ploy to help himself get reelected by Wisconsin Republicans who have bought into the idea that government help for Americans is somehow socialist and bad. The poor clerks had to stay up all night taking turns droning on and on reading the bill. Fortunately, Ron Johnson was also forced to stay in the Senate chamber while the 628 pages were being read. That was at least some small punishment for what he did to those clerks.

The claim is that if you give more money to Americans in need that will keep people from going out and looking for jobs. There is no evidence for that claim. There is evidence to the contrary. https://www.npr.org/2021/03/04/973653719/california-program-giving-500-no-strings-attached-stipends-pays-off-study-finds. Looking through the GOP “me” lens, however, it is understandable that many conservatives are against giving money to millions of Americans because they think giving to others is zero sum game. Using the “ME” lens, Republicans want to keep the money for themselves. If all Americans get more, they think they get less. They are wrong about that too, but that is a topic for another blog.

Trump and Trumpism v The Will of the People

Republicans have gone down the rabbit hole with Trumpism. They continue to cling so hard to Trump that little Trump mini mes have popped up across the country like teenage pimples. There is Ron Deathsantis, Ted Cruz, Josh Hawley, Marjorie Taylor Greene, Mo Brooks, Paul Gosar, Matt Gaetz and many others– all of them Trump wannabees. They represent the ME ME ME ideology ushered in by the Koch brothers and embellished by Trump to include white supremacy and conspiracy mongering.

The Republicans think this is the recipe for success in 2022.  And maybe Republicans could pull this off if they are able to suppress the vote in red and purple states, make it harder for Americans to get to the polls and make it harder to get their vote to count and maybe even make it possible to disregard the will of the voters and send a slate of state legislatively chosen electors to vote for president when the Electoral College convenes. But what Republicans are trying to do goes against the will of the American people just as voting against the pandemic rescue goes against the will of the American people.  That’s not going to happen. Biden is not Obama. Today Biden used an executive order to push the administration to make voting easier for Americans.

HR 1: How You Can Help Defang the Filibuster

HR 1 “For the People” act has been passed in the House. It is a measure that would virtually overcome all of the over 200 state voter suppression laws being passed by multiple Republican state legislatures. Currently the filibuster will prevent the Senate from passing that legislation because it will need 60 votes which means Republicans would have to reject the idea of making sure Biden fails, which is not going to happen. By refusing to pass legislation Americans want, the GOP will be seen as the party of endless NO! Pressure from Americans will build on lawmakers to do something to defang the filibuster.  Even now Joe Manchin, whose vote is needed to alter the filibuster rule, has said he is willing to look at ways to make it more painful to use the filibuster as a weapon to defeat legislation.

Do you want to help build pressure to limit the filibuster? If so, here is a road map you can follow to help make that happen. We need to put pressure on our elected officials to pass the “For the People” act.

If Biden and the Democratic Party can give Americans what they want, the Dems will win state and national elections for years to come and Trumpism will be rebuked and will recede. Let’s do this!!