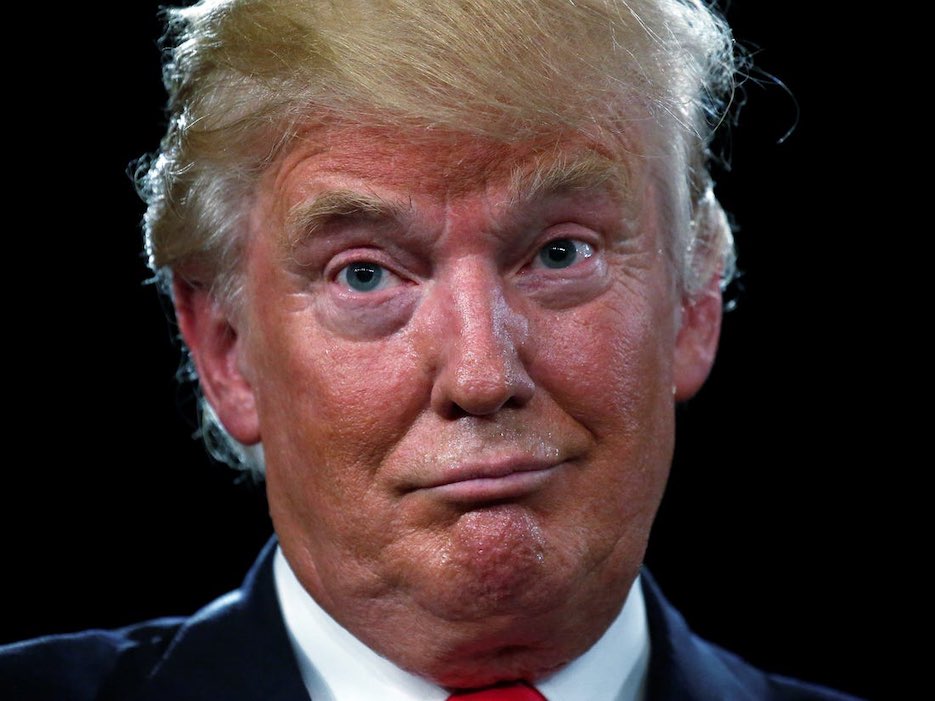 Trump is handing out pardons and commutations like Oprah Winfrey used to give away cars on her Christmas special show. Roger Stone and Mike Flynn already got theirs. On Tuesday, December 22, Trump gave out 20 pardons or commutations to, among others: 4 murderers who conducted a massacre in Iraq, 4 former GOP congressmen who had pleaded guilty to white collar crimes and two people from the Mueller investigation who lied to investigators: George Papadoupolos and Alex Van Der Zwaan. The presidential power to pardon is a constitutional gift to a president but the founders never thought the American people would elect a criminal president who would pardon people who lied for him or refused to “rat him out” so he could obstruct justice or pardon corrupt politicians as long as they were loyal supporters of his. But here we are. And the question we have to ask ourselves is this: what if Trump pardons himself?

Why Trump Will Want to Pardon Himself

Trump is a desperate man. As soon as he leaves the White House he will be a citizen, not a president. While presidents may be shielded based on an OLC opinion, once presidents are out of office, they do not have that protection anymore.

What Kind of Hot Water is Trump In?

Trump faces indictment as Individual 1 in the Stormy Daniels matter for which Michael Cohen, his former lawyer- fixer is already doing time. Cohen testified that Trump directed him to do this crime. As the person who directed the criminal activity, Trump would be considered more responsible than Cohen in the eyes of the law. If charged, that would be a federal offense.

Trump met and spoke by phone with Putin on numerous occasions either without a translator or with one, but Trump ordered the translator’s notes from the meetings to be destroyed. What were they talking about? Given the fact that Trump never once chastised Putin for anything Putin did to us, including bounties Russians put on US soldiers and the vast cyberattack on our government that Pompeo says was carried out by the Russians, it is more than likely that Trump and Putin discussed things that Trump has wanted to keep secret. Did they have some kind of quid pro quo agreement that Trump would never implicate Putin in exchange for a personal benefit for Trump of some kind?  That would be consistent with Trump’s behavior we have learned about in the Mueller Report and Trump’s impeachment (Ukrainegate). Congress should subpoena the translator to learn what was said between Trump and Putin. Trump has acted as a traitor to our country in many respects. I think there is a reason for that. I think he is and was a willing Russian asset. It is important to follow up on these secret meetings to learn what was discussed.

There are state charges that will be brought by the NY States Attorney, Cyrus Vance, and the NY AG, Letitia James. A pardon will do nothing to stop state matters both criminal and civil from being brought.

Trump could be facing indictments the moment he leaves office. Trump is probably thinking about pardoning himself along with all the other guilty people he is currently in the process of pardoning. Some of these pardons are a way to showcase his power. Some are a way for Trump to flip the bird at prosecutors and the law. Some protect himself from facing punishment for his own wrongdoing, or so he thinks.

Many of these people Trump is pardoning are probably co-conspirators and witnesses to his criminal activity while he was president. He wants these people to repay him with loyalty by protecting him, not testifying against him if and when charges are brought. This in itself is a corrupt use of the pardon power and should not be allowed, although there might be no way to prevent Trump from pardoning others because other presidents may have set the precedent by doing it already. I’m looking at you, Bill Clinton and George Bush.

Trump is highly motivated to get his own “get out of jail free card pardon”, but since he is president, the only way to get that done while still being president, would be a self-pardon which has never been even considered before because we have never had a president this corrupt and lawless.

Trump might think this clever self-pardon idea will spare him from all prosecution based on federal evidence, but he is wrong about that. Whatever cannot be criminally prosecuted federally will be referred to the States Attorney in New York, Cyrus Vance, to pursue. Civil violations will be referred to Letitia James, the Attorney General for New York.  NY state will be receiving the evidence from the feds and moving forward with cases charging Trump under NY state laws which generally mirror federal laws when it comes to fraud and corruption.

In addition, once someone is pardoned, he loses his 5th Amendment right against self-incrimination. Michael Flynn (and all the others who are pardoned) could be forced to testify in cases brought against Donald Trump as soon as Trump leaves office. If Flynn, for example, lies or refuses to testify, Flynn could face new charges and prison sentences based on his refusal which Trump would no longer have the power to pardon once he is out of office.

Would Trump Get Away With a Self-Pardon?

There is a DOJ opinion against self-pardons.

In 1974, President Richard M. Nixon’s own Justice Department’s Office of Legal Counsel issued an opinion stating that Nixon could not pardon himself, based upon “the fundamental rule that no one may be a judge in his own case.” Likely for that reason, Nixon never pardoned himself. (Washington Post)

But unless Trump resigns from the presidency early, allowing Pence to take over as president long enough to pardon him, as happened with Nixon, Trump might roll the dice and try pardoning himself despite the DOJ rule against it. Trump has always gotten away with everything. So he might think he could get away with breaking the rules again. But this is different because he would no longer have the power of the presidency to rely on after January 20th.

Laurence Tribe and other Constitutional scholars do not believe a president can pardon himself. Tribe reasons that…

[N]o one can be both the judge and the defendant in the same matter, and that no one is above the law.

The Constitution specifically bars the president from using the pardon power to prevent his own impeachment and removal. It adds that any official removed through impeachment remains fully subject to criminal prosecution. That provision would make no sense if the president could pardon himself.

Frank O. Bowman III, a University of Missouri Curators’ Distinguished Professor and Floyd R. Gibson Missouri Endowed Professor of Law, has also studied the issue and written about this. He has concluded that presidents cannot pardon themselves.

(The) Constitution says that Congress may not impose criminal penalties on a president, but the president is nonetheless subject to federal criminal prosecution through the ordinary courts. To my mind, this provision alone is dispositive of the self-pardon question. As a matter of original intention, the implicit threat in Article I of criminal court action against a crooked or tyrannical president would be a nullity if the Framers entertained any notion that a president could pardon himself. Indeed, we have very good evidence that they saw the threat of prosecution as an important constraint on presidential misconduct and never imagined a president could pardon himself out of that threat.

Pros and Cons of Trump Being Prosecuted After Leaving Office

There are arguments for and against the criminal and civil prosecution of Trump once he leaves office. If Trump is prosecuted, that will inflame his base and make him once again the center of attention instead of fading away as we all want him to. We already know that Trump will make false claims about witch hunts and conspiracies and insist others are the criminals not him.

But if Trump is not prosecuted it will damage our country’s ability to reinstate the rule of law and require accountability from everyone including rich white guys. Trump’s administration broke rules, laws and norms with impunity. The American people also deserve to know exactly what Trump (and his family and enablers!) got away with. Once that is determined, they should all be punished just as anyone else would be, and that includes Trump himself.

What if Trump Pardons Himself? What Then?

However, if Trump does pardon himself, Biden really cannot ignore that. It would set a precedent that a president is totally above the law even after leaving office. If there is no accountability for wrongdoing while president OR after leaving office, a president could do anything at all including shoot someone on 5th Avenue and get away with it without facing any consequences whatsoever. That is inconsistent with the founding father’s ideas about presidents not being kings and courts that have already ruled that presidents are not above the law.

What Should Biden Do if Trump Pardons Himself?

Biden should first refer the question to the Office of Legal Counsel. If the OLC in 2021 concurs with the precedent of that office in 1974 — which is highly likely — this legal opinion would constitute a second piece of guidance shoring up the position that self-pardons are inherently unconstitutional. It would provide a basis for President Biden to then issue an executive order nullifying Trump’s action. (Washington Post)

Once Biden nullifies Trump’s self-pardon, the matter would likely be appealed by Trump, eventually up to the Supreme Court. Depending on what the lower appellate court has determined, the Supreme Court would have the option of hearing argument or not. Assuming the lower court has determined by a well-reasoned opinion that self-pardon is not a *thing*, I would take a bet that the Supremes would opt not to hear the case just as they recently did with Trump’s recent lawsuits alleging bogus election fraud, because the Court prefers to avoid political entanglements if at all possible.

Assuming a self-pardon is determined by the courts to not be a *thing*, Trump would be up s–t’s creek without an oar. Federal criminal indictments would follow.

(These opinions are my own. I am a former Assistant US Attorney, 7th Circuit, Chicago office.)

Senate Trial – What’s Next and Why It Matters

Trump Could Be Removed Without Even ONE GOP Vote

What’s With that Twenty-Page Memo from Trump’s Legal Team?